This is a piece written by Julie Wark, one Fred’s closest friends, who was with him at hospital during his last days and moments. Julie did not want to publish this essay – you will understand why when you read it. She kindly allowed me to share it with you, in this personal blog (You may read this with my previous post; they are complementary https://thevoid.blog/2018/03/13/barcelona-fred-barcelona/.)

PLEASE DO NOT PUBLISH OR QUOTE WITHOUT PERMISSION!

Fred was a giant in more ways than one. Some months before his death, he weighed almost 180 kilos. Some of us who loved him wondered why he was so wilfully undermining his health. Sometimes we wondered about slow suicide and Fred was indeed preparing for his death, giving detailed instructions concerning his last wishes to myself and another friend in Barcelona as early as 2008. Yet he fobbed off our fears by his huge enjoyment of the simple pleasures of life, his conviviality, his wit and his zest.

In all the tributes to our colossus there is almost zero mention of a couple of key facts of his last years or, better said, lifelong facts that took on their noticeably self-destructive form towards the end of his life. His greatness certainly tended to overshadow his frailness and, in our loss – massive and impossible to take in properly when a colossus leaves us – it is perhaps too hard to think of frailty, not least because it raises questions of whether we might have helped him more. Fred had a severe bipolar disorder and was an alcoholic. It was easy to put his mood swings down to his being a tormented genius and he nourished the deceit. His alcoholism usually took the Dionysian form, so he was generally excellent company over a good meal and a bottle of wine (which he tended to precede with a few extra, solitary, glasses of wine or g&ts) but these occasions sometimes ended in an outburst of amorphous wrath, which he would try to focus on some perceived slight. As soon as the attack was over he would always phone and apologise. But the rage never left him.

He grew up in the Irish border town of Dundalk with all its associations with the mythical warrior Cú Chulainn and later troubles, and was educated by the Marist brothers until being sent off to a Benedictine boarding school in England at the tender age of eight. His well-to-do English father was an alcoholic and Fred’s childhood was traumatic. When he was a young child his mother gave him the task of finding his father’s stash of bottles and perhaps his white-knight streak, his desire to save people goes back that far. At twenty he was in Lourdes washing pilgrims’ feet, wanting to be a priest and, not long afterwards, he had chosen another form of saviourhood, putting his intellectual gifts to the best use he could with the revolutionary Black Dwarf and New Left Review projects in London when he was not with guerrilla fighters in Dhofar.

Nothing he could do, all his knowledge, all his gifts, all his untiring efforts, nothing could prevent the events that led up to the Gulf War (1990-1991) – and the opprobrium he suffered at the hands of some of his erstwhile comrades because of his support for that war – the attacks of 9/11 and everything that followed in the Middle East. He understood the subtleties of Islam, understood the West and the intricacies of its constellations of power, was a brilliant international relations theorist and he could not bear the crude viciousness of the polarisation that tore his world apart. Fred was not an ideologue, which meant he was never a god-that-failed Marxist either, so there was no easy intellectual or political refuge for him. The major nervous breakdown that followed was nothing more than a year’s hospitalised, heavily-medicated respite.

The Fred who came to set up a base in Barcelona in 2004 wanted to write about cosmopolitanism and to find happiness. His marriage was over and he was going to rely on his insatiable curiosity about “the persistent unpredictability” of human affairs, his old friends, a good climate and a Mediterranean culture to bring some of the joys he felt London denied him. The bevy of young Latin American beauties whom he fussed over and worried about, and who seriously fleeced him, did not provide the “family” he wanted. Just before his second and final breakdown he said he realised he had only succeeded in making a great big bubble for which, like the financial one that was blowing up everywhere else, he paid a personal price greatly at variance with intrinsic values. His other family was my own. He spent Christmases with us, knew all the ins and outs of our lives, was welcomed, and he endeared himself to everyone, but we weren’t enough either.

Fred’s quest for recognition often took the form of feeling slighted followed by raging about some or other colleague who hadn’t appreciated a favour, the minister who hadn’t sent a car to pick him up at the airport, the editor who never valued his articles or books enough, the government that failed to seek him as an adviser, the colleagues who avoided him. The devotion and understanding of his students, so eloquently articulated in the many beautiful letters they sent him as he lay dying, the love of his friends and of his younger colleagues (and some former ones) and PhD candidates he had supervised with great empathy and attention could not fill his need. He craved love and rebuffed it: love me but noli me tangere. He was so loved and so alone.

A habitué of the spheres of governance, Fred befriended waiters, shopkeepers, bar flies and people he sat next to on planes; he respected the great and powerful, sometimes too much, but never lost his strong anarchist streak; got around, even on quite formal occasions, in scruffy shorts unconcerned about showing off the frighteningly blackened legs of his collapsed veins, but somehow never lost his elegance, even in the most disreputable of the outsize t-shirts that occasionally didn’t quite cover his monumental belly; was a giver of himself and of small, carefully chosen gifts from his travels; an attentive, caring and, at times, most vexing friend; at once heartbreakingly open about himself, his dreams, his projects and his troubles, and eel-like in his evasiveness; the white knight who wanted to ride into battle for a lady (or even to fly across the world to “knee-cap” (roar at) a publisher who once cheated her); a gentleman; a gentle man, who poured scorn on the apostles of postmodernism (“po-mos”) and sloppy mawkish thinking; a tough guy with a touch of marshmallow; stoic in the physical discomfort that was the revenge of a sorely tried body; the ascetic of great appetites; wise man with the child’s curiosity; erudite lover of language, words and etymology, of some poetry, of some music, and implacable teller of corny jokes; the man of commanding presence who crumpled and cried drunkenly (mawkishly even) late at night over his Irish ballads and phoned then to share his sorrows; the revered keynote speaker who, again, got on the phone to Barcelona at three in the morning for comfort when he just could not handle Jerusalem and who was talked though instructions to pack his bag and get himself down to Tel Aviv and on a plane out of there now, obeying with the meekness of a lamb. He had a singularly lovely smile in an often melancholy face.

Fred, the man who seemed to have it all, struggled hard and for a long time with ferocious personal demons. His gallant battle to remain above them, not to submit, and the arms he employed against them – his brilliance, his ethical commitment and his intellectual generosity – were very much part of his greatness. Perhaps this recognition will generally be denied him too for it is easier to revere the public figure. 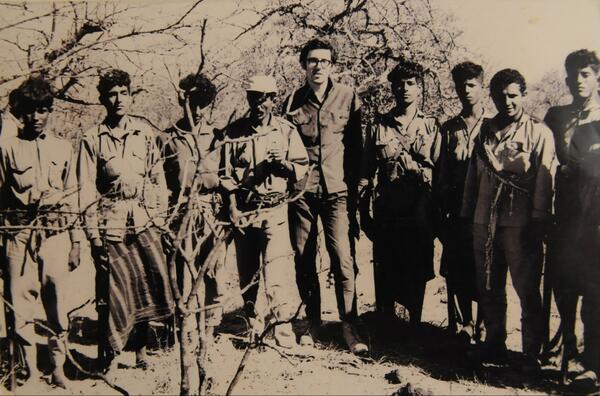 Fred with Dhofari rebels, early 1970s. This photo has always been special to him.